With over 50 different types of whiskeys, our cellar is a must visit for any whiskey lover living in or visiting Copenhagen!

With over 50 different types of whiskeys, our cellar is a must visit for any whiskey lover living in or visiting Copenhagen! 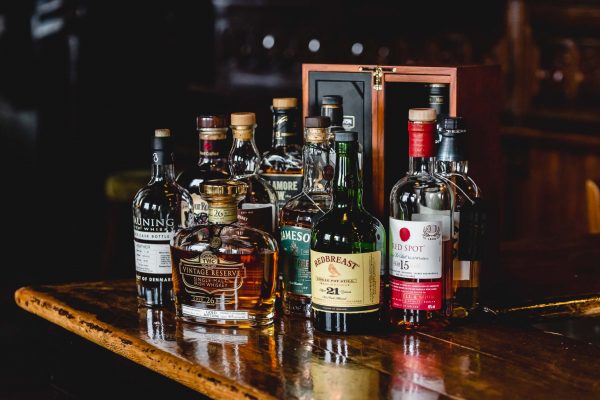 “A blend of carefully selected casks of aged malt and grain whiskeys, Fercullen Premium Blend Irish Whiskey, is aged in seasoned oak giving it a rounded smoothness and unique depth of flavour that draws from a rich background of grain, malt and toasted oak.”

“Carefully selected from rare stocks of aged Irish Whiskey, the Fercullen 10-year-old Single Grain Irish Whiskey has been aged exclusively in white oak for over a decade before being recasked to mature in fresh bourbon barrels. Balanced, with light, sweet, subtle tones, this inspiring Irish whiskey lends character and company to any occasion..”

“Carefully selected from rare stocks of aged Irish whiskey, Fercullen 14-Year-Old Single Malt has been expertly distilled and set aside to mature in bourbon barrels by one of Ireland’s most accomplished Master Distillers Noel Sweeney.”

“An exquisitely Balanced Single Malt Irish Whiskey. Matured in bourbon barrels for over 18 years. Oak and Bourbon tones have married to deliver the perfect Whiskey for celebrating very special moments.”

“The oldest expression released by The Powerscourt Distillery to date, this will become an exclusive annual release with the vintage year prominent on the label.
This whiskey is a marriage of 21 year old bourbon barrel matured whiskeys and a selection of Spanish Oloroso Sherry and Pedro Ximénez finished whiskey.
Taking inspiration from the atmospheric bodegas of the Andalusian region of Spain, the distillery team have combined the distinctive dark fruit sherried flavours of the region with the soft elegance of 21 year bourbon matured malt whiskey.

Bottled at 46%, non-chill filtered and natural colour, this Single Malt is destined to become one of the great Irish whiskeys of the modern era.

“Named after the distillery’s master distiller, and it is aged in both bourbon and new American oak barrels! Very interesting indeed and a limited release of around 2,500 bottles per year.”

“Sweeter and harder than Green Spot. Apricot and almond flavours.”

“Subtle, with orange, pineapple, gentle vanilla, creamy custard, and even a touch of watermelon dancing across a rich, grainy backdrop.”

“Oloroso and bourbon cask aging for a rich and creamy flavour.”

“Matured in a combination of American and European oak casks for 9 to 12 years, before being transferred over to first fill Oloroso Sherry casks from Bodegas Lustau for a year. Honey and cinnamion to taste, with a sweet apple finish.”

“Distilled in 1991, this 24-year-old whiskey from Teeling was aged initially in bourbon barrels before being finished in Sauternes casks. Made with a small amount of peated malt, this is a subtly sweet whiskey with notes of ripe fruit and a hint of smoke.”

“After being double distilled and spending 25 years in a selection of bourbon casks, the whiskey was finished for a year in White Burgundy wine casks.”

“Collaboration whiskey between Teeling and various breweries (depending on bottle edition) finished in their stout barrels. Chocolatey and rich, with a light hint of rye spice backing it up with a subtle jenever-like maltiness to finish.”

“Matured in wine casks. Light and fruity with good depth of flavour.”

“Fruity with cinnamon and pepper hints”

“It’s made from 50% malted and 50% un-malted barley, a rather historic and traditional Dublin mash bill, bottled at 46% ABV without any chill-filtration or additional colouring.”

“Rum influence is very present, mainly through those classic funky, dunder-like aromas. Everything is complemented by spices, mainly cinnamon. “

“A small batch whiskey produced at Teeling and matured in collaboration with ex-DOT Brew Dark Porter Casks to impart wonderful chocolatey notes to this fruity and spicy whiskey.”

“Grain whiskey slowly matured for a minimum of five years in American oak casks before blending with Irish Single Malt whiskey to produce this original blend. “

“A rich, dark, Irish blend, Black Bush contains a high proportion of triple-distilled single malt, aged in Oloroso sherry casks for around 8-10 years before marriage with the grain. Picked up the top prize in its category at the World Whisky Awards 2010.”

“11+-year-old ex-Bourbon and ex-Oloroso casks that have been married and finished in ex-Marsala casks for 6-9 months. In a way, it’s like a baby Bushmills 21, or Bushmills 16, but with Marsala instead of Madeira or Port”

“The sweet spice intensity develops from the first taste creating a creamy mouthfeel. Honey and floral notes rush in marrying with the sweet vanilla and accentuated dried fruit flavours”

“Well-rounded with a fruit, vanilla and cinnamon taste.”

“Well balanced with tastes of malt and dark spice.”

“The aroma begins with a lemon tart complete with pastry shell. There’s a bit of vanilla custard there as well. These flavors continue on the palate where the grain flavors reveal themselves a bit more. “

“A well-known blend, reputedly named after a gregarious travelling sales rep for the distillery who made sure that everyone who crossed his path tried a glass.”

“Well own Irish whiskey, made of blend of pot still and grain whiskey.”

“Well balanced with a chocolate, vanilla and coffee flavour.”

“Very smooth with vanilla, dry spice, chocolate and coffee. There is dark fruit here too, raisins and blackcurrants.”

“Double-distelled in Cooley Distillery’s copper pot stills and aged for 16 years in American oak barrels. Oily and smooth, citrus tasting notes, the richness of the spice sees off the fruit and concludes a strong dram. “

“Balanced and creamy with notes of spice cake, chocolate oranges, sultanas, mission fig, and butter toffee with a kick of spice.”

“Mellow flavours of toffee and nuts with medium-length harsh finish.”

“Single Pot Still Irish Whiskey and Single Grain Irish Whiskey aged for at least 18 years, from a mix of ex-Bourbon and ex-Sherry barrels, it’s similar to the Jameson 18 year Limited Reserve, but with three key differences: No chill filtration, delivered at full cask strength and the location of the finishing.”

“Full bodied with hints of coconut and cinnamon.”

“Aged in bourbon and sherry casks then introduced to hand selected Málaga casks.”

“Precision distilled single malt scotch. It’s got a rich and earthy backbone, with sweet liquorice and touches of tar.”

“Very lightly peated with sweetness and spiciness from bourbon casks.”

“Full bodied with hints of tropical fruits and creamy toffee.”

“One of the best known Scottish blended whisky out there. Sweet and very balanced.”

“Medium smoked with a rich and balanced taste”

“Light and floral with a good balance of sweet wood and fruits.”

“Fresh, clean and very aromatic. Floral notes abound the senses with a light grassiness. Notes of creamy Manuka honey and a touch of juicy citrus with cream and a well-balanced sweetness.”

“Black Label is a blend of around 40 whiskies(!), with a distinctive mellow smoky note.”

“Big, smoky muscular peat notes. There are spices, and liquorice, as well as a big dose of salt. This whisky has become slightly sweeter in recent years, and it appears beautifully on the nose.”

“Oily and buttery nose, with toffee, nuttiness, hickory, bicarbonate of soda, rum and raisin ice cream and zest. Big rush of sweetness, in fact it’s an explosion of sweetness, with fiery chilli heat, TCP, sweet cereals and a touch of cola syrup.”

“A Speyside trifecta – a blend of Glenfiddich, Balvenie, and the Kininvie distilleries.”

“A very popular Highland dram, with banana and sweet citrus fruit notes alongside a faint whiff of brine. A winner at the World Whisky Awards 2010 and a perennial favourite.”

“Aromas of citrus, marmalade and a hint of fudge, which develops into beeswax and acacia honey. Vanilla fudge, barley sugars and molasses. A peppery and fragrant wood finish.”

“The 10 year old from the Springbank distillery in Campbeltown, a mixture of both bourbon and sherry matured whisky.”

“Sweet at first, with hint of pepper and nuts.”

“From Hokkaido’s Akkeshi Distillery, this lightly peated whiskey has a golden hue and mild, toasty aromas of almond and vanilla.”

“Medium bodied with apple and apricot notes and some earthy spiciness.”

“The flagship release is aged in a combination of wine, sherry and bourbon casks. This is a light whisky with subtle notes of mint, honey and wood spice.”

“Coffee, caramel, chocolate and raisins. The aftertaste is soft. Elegant and accessible, a nice balance.”

“A velvety mouthfeel with rich oak, cinnamon, ginger and a touch of chilli spice, balanced by toffee sweetness.”

“A light and pure nose that consists of fruits such as lemons, oranges and floral scents mixed with a bit of sweet sensations such as caramel and cinnamon all mixed with a hint of oak.”

“Medium bodied, clean and crisp. Fruity with a little smoke.”

“Sweet apricot and plum notes, with a dusting of baking spices. Lemon and orange peel notes develop, with a pinch of peat smoke underneath.”

“Made with a mashbill of 95% rye and 5% malted barley and is produced in small batches. An absolutely stunning rye that won a Double Gold medal at the San Francisco World Spirits Competition in 2013.”

“A giant of Canadian whisky, created in 1858 and spending six long years in oak before bottling for the smoothest possible flavour.”

“Full bodied. Very smooth with hints of liquorice and apple.”

“Pure sweetness, honey, marzipan, and wildflower notes. The sweet drive is nicely backed with drying oak on the pronounced finish.”

“A terrific small-batch bourbon from Four Roses – and in this case, Small Batch means just that – only four casks are used in the construction of each release. Sweet and spicy, with a generous dash of vanilla, this is a treat.”

“Wonderful caramel color with spicy flavor notes of oak, white pepper, vanilla and English toffee. The unique blend teases your palate with honey, baking spice and nutmeg as well as hints of coffee and fine chocolate.”

“Quite smooth and soft with notes of banana milkshake, a mixed nut note, a touch of caramel with crème anglaise.”

“Aged for four years in oak barrels to create a smooth, mellow taste with hints of spice.”

“Butterscotch, dry wood, spicy rye notes with bits of creamy vanilla and a hint of something fruity. Big, bold and just lovely. An outstanding balance of spicy and sweet. Cinnamon and pepper followed by vanilla and sweet cherries.”

“Tinned peaches, hints of golden syrup and a touch of marzipan.”

“Butterscotch and honey, spice and a hint of mint. Powerful baking spices and pralines with vanilla and more. Bold and strong with toffee and wooded spice.”

“America’s biggest-selling premium bourbon, the much-loved Wild Turkey 101 is a richly-flavoured concoction with a mellowness that belies its high strength.”

“Notes of honey and spice, leather, a touch of cocoa, a little smoke, toasty oak and vanilla cream with a hint of butterscotch.”

“Western Australian single malt made using local barley. This incarnation of their small-batch whisky has been finished in Australian sherry casks after maturation in second-fill bourbon. The nose is dominated by spice and fruit notes, underscored by malted barley, vanilla, raisins and butterscotch. These notes continue on to the palate, followed by a long, smooth finish.”

“A whisky that appeals to Islay fans. It has got its smoky characteristic by drying and smoking the barley with dry peat from peat excavated at Klosterlund Museum.”

” Spicy with notes of almond, coffee, liquorice, cherry and has a wonderful nice reddish color in the glass. An exciting whisky.”

“Slightly smoked witha hint of blackcurrant. It has its smoke from drying and smoking the malted barley with burnt heather harvested from the heaths of western Jutland.”

“It has a nice dark amber color. It smells light of smoke, grain. Whiskey is complex with a well-balanced flavor of smoked chocolate bar, nougat and vanilla. There is an incredibly long aftertaste.”